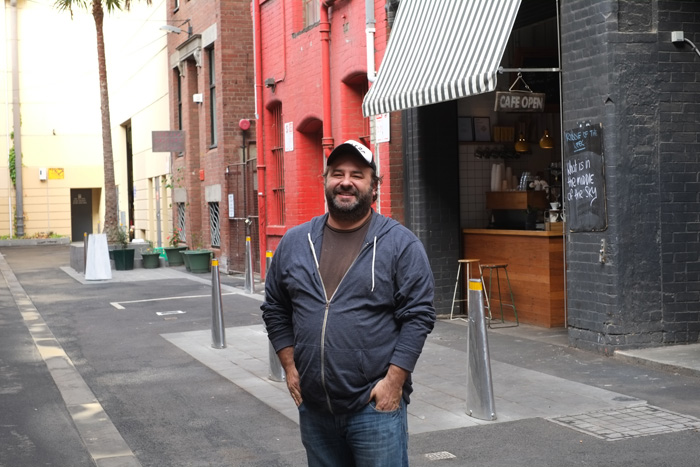 Our tour starts on the corner of Little Bourke Street and Elizabeth. We head uphill and take a quick left down down the first laneway: Somerset Place. These days it's home to The Little Mule, Captains of Industry and a backpacking supplies shop. Jerome explains that when he first lived in the city his family were running a real estate agency. He points to the end of the lane: "The first property I managed was in that brown building just there. The tenant's name was Tony. That was about fifteen years ago, I don't know why I still remember his name! He was a collector of some description. Back then, there certainly weren't all these apartments." We head past The Little Mule, which Jerome remembers was once the loading dock for the old McGills newsagency on Elizabeth Street. "And that was the entrance to Central Station Records. Somerset Place has changed. It's a beautiful lane, though, isn't it?" 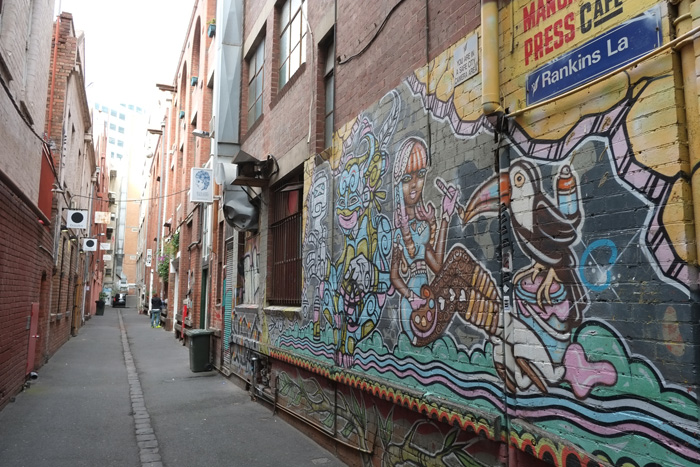 We head further up Little Bourke Street and turn left into Rankins Lane. Once home to a carpark and a fruit-packing warehouse, it's now the address of Manchester Press cafe (where the carpark used to be), the Comme des Garçons Pocket shop (where the fruit-packing warehouse used to be) and the Henley Club.  Jerome remembers, "We used to manage a property down here as well. Down the very bottom on the left-hand side. The tenant’s name was Con. He was the first fashionista that I ever met. He worked in clothing stores, but it obviously didn’t rub off on me, did it?!" He stops to chat with a friendly guy in a suit. "That was the owner of the Henley Club. It’s actually quite cool. They’re on a higher level intellect type thing where they get guest speakers who, you know … the founder of Google and all that stuff. You should check out the Henley Club." 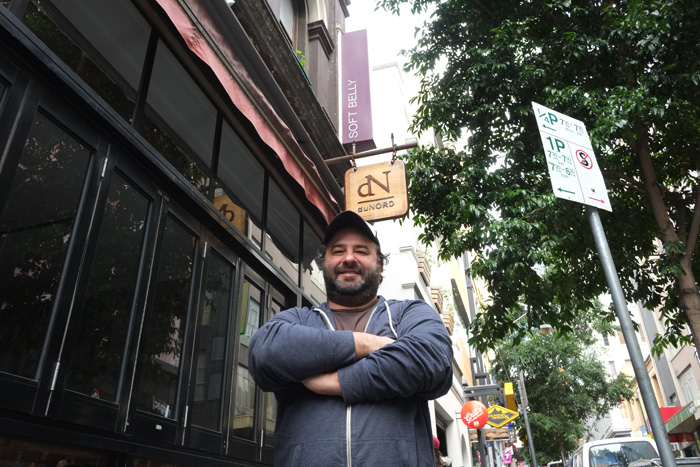 Back out on Little Bourke, we head uphill to the corner of Warburton Lane. This was the site of one of Jerome's first CBD bars, Softbelly. It's long gone now, but Jerome looks up and realises the sign is still there! "Most of my staff from Softbelly used to live upstairs. It was really casual. They weren’t all professional waiters, and the crowd wasn't 100 per cent corporate. There were a lot of creatives in the area. Some nights you couldn’t even open the doors to get in." He remembers quite a bit of trouble with residents complaining about the noise. "We had to close the front windows at like 8 o'clock." 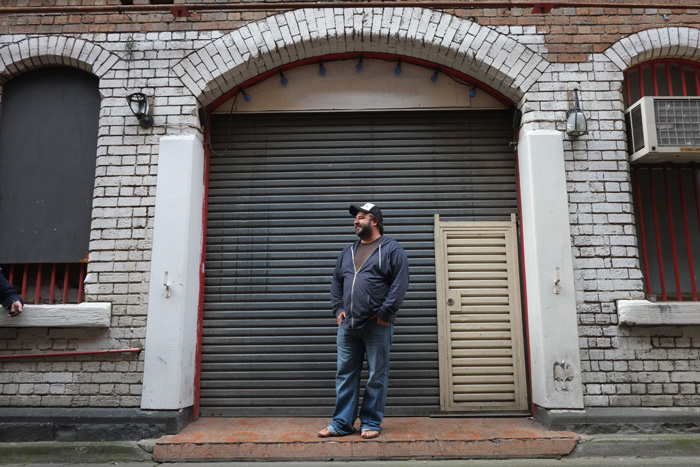 "There was a back entrance through here that we started using and of course that caused issues with council for some unknown reason. This is where the deliveries were and it went straight down into a basement." These days, Warburton Lane is home to Portello Rosso Jamon Bar and Murmur,  but Jerome says it wasn't always so easy to open a bar in a laneway. "Years before this was even about, I offered to lease these spaces. I must’ve spent a year arguing with council over turning this into a bar!" 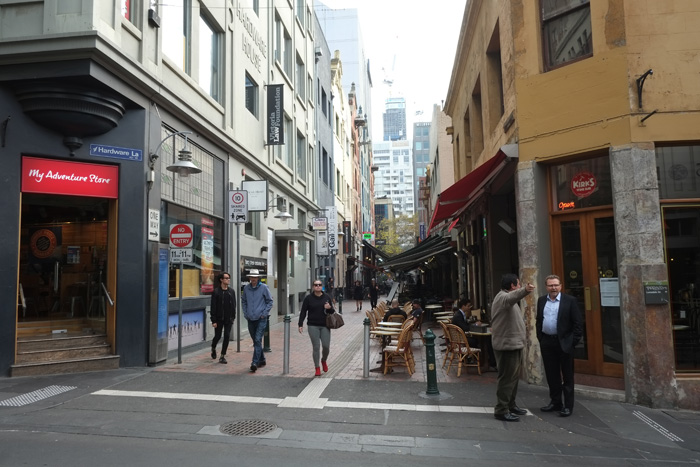 Next we head up Little Bourke and take a right at Hardware Lane. "What I love about this street here, is everybody sits outside. Doesn’t matter how cold it is." Jerome's family's real estate business was located at the end of Hardware Lane, close to Little Lonsdale. "I’ve lived in the city for 24 years. What I'd do at night—I’d go home first, have a sleep, put my real estate suit on, go out partying and then go straight to work." Jerome points through the window of a basement bar. "That's Khokolat Bar! Rob the owner would come to Softbelly and then we’d go back there and just run amok." 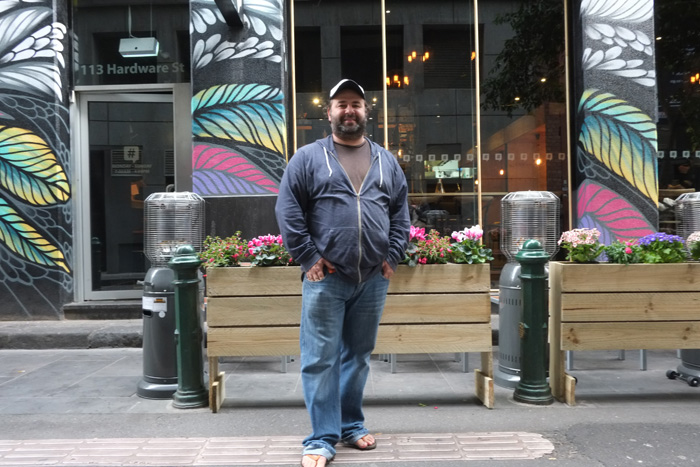 "This place, 113 Hardware, was my very first office. Back then, there was us and there was Discurio." He explains that Discurio was a specialist jazz and world music CD shop. "For me, when you see those kind of places move, it’s a bit sad." As we take a right down Little Lonsdale Street and head back towards Elizabeth, Jerome explains, "I wanted to bring you this way to show you the development in this street alone." He points across the road: "This has been sold for development on the corner here. That carpark has been sold for development. This has got a 35-storey permit. Behind that there’s a 60-storey building going up … So you’re going to lose these shops." 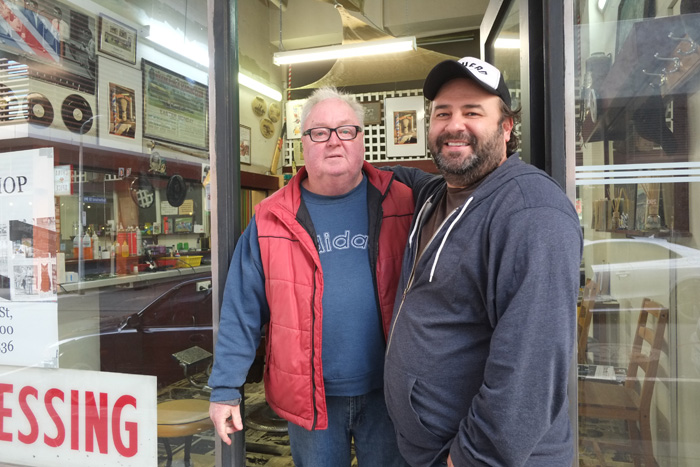 We stop at a barber shop owned by Jerome's friend Peter. "Because our office was here, we’ve known him forever. He does my beard and you can obviously see how often I get that done …" Peter explains that he's been in the shop for 23 years. Originally, he took the business over from a guy named Bernie: "Yeah, he was 65, he’d been here 25 years." We discuss all the changes that have happened on the street in that time. Peter says he's recently lost a bit of sunlight with the buildings going up over the road, but has gained a few customers. "Some of them go to the cheapie around the corner and when they realise it’s only clipper work they come back around here." 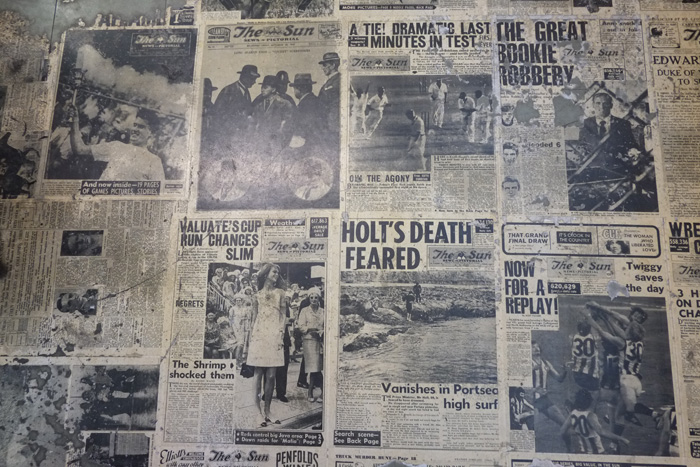 There is plenty of history on Peter's floor, which is laminated with ancient copies of the Sun newspaper. He shows us the oldest one—a front cover featuring infamous Melbourne mobster Squizzy Taylor. "The 22nd of September, 1922. That was the first edition of the Sun! I stuck ‘em to the ground, sheet by sheet, with the PVA glue." 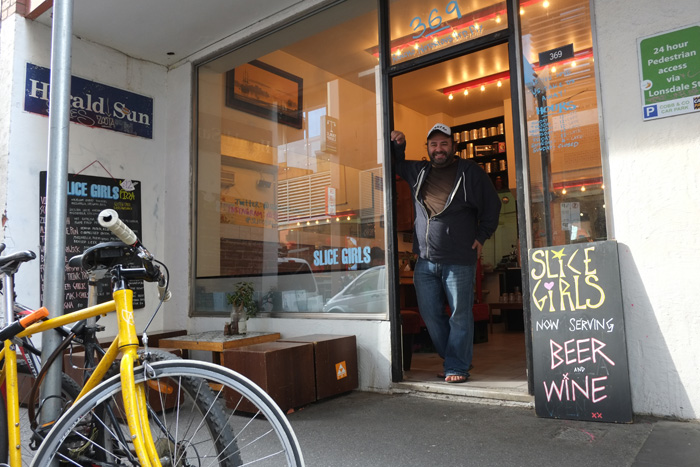 We say goodbye to Peter and head next door to Jerome's cafe Slice Girls. He explains that it used to be a takeaway place called Poppy's. "They used to run a deli. You know, old school, Greek, fish and chips and potato cakes. Once Poppy moved out of here, I wasn’t gonna let the shop go so we opened up Slice Girls in here. I wanted to try to preserve it as much as possible." 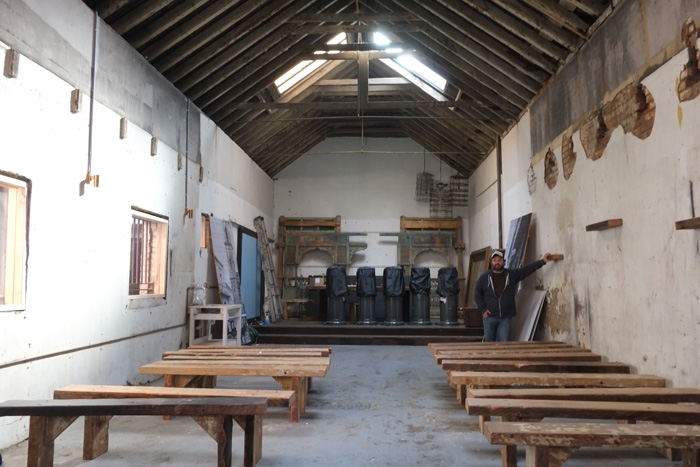 A few doors down we arrive at Jerome's own enormous bar and cafe Thousand £ Bend. "Before we took over the lease, this was Peter Stevens’ Motorcycle Repairs." Jerome points out that it's directly over the road from another historic Melbourne business, Phillips Shirts. That building has recently been sold for development, so Phillips will move out soon. "Have you ever been up there?" asks Jerome. "Go up there! It’s really worthwhile. It’s old school. The shirts are so old—you know those frills? Like the puffy shirt off Seinfeld. We've used them in a few photoshoots." 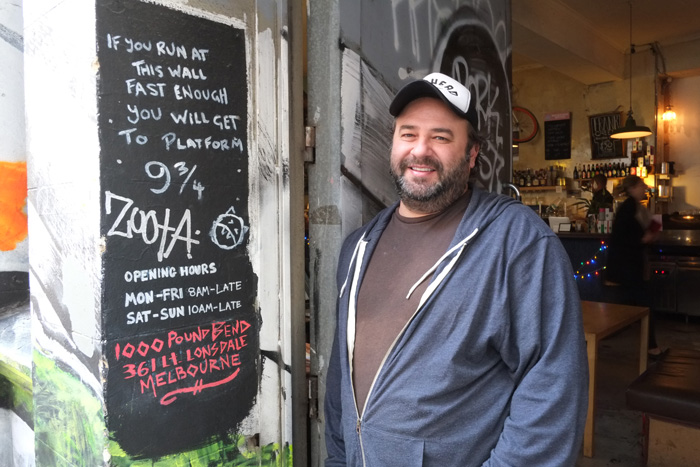 Inside, Thousand £ Bend has a big front bar and cafe filled with coffee-swilling locals working on their laptops. Out the back is a huge light-filled area where they're renovating the bar and adding a kitchen. Head a little further back though, and you'll find Jerome's own chapel: "This is the Church of Bang Bang Boogaloo! It's for getting married. The whole floor was originally covered with black and white lino, and the roof was covered with this old, crappy plaster. I'm just trying to bring it back to its original condition." 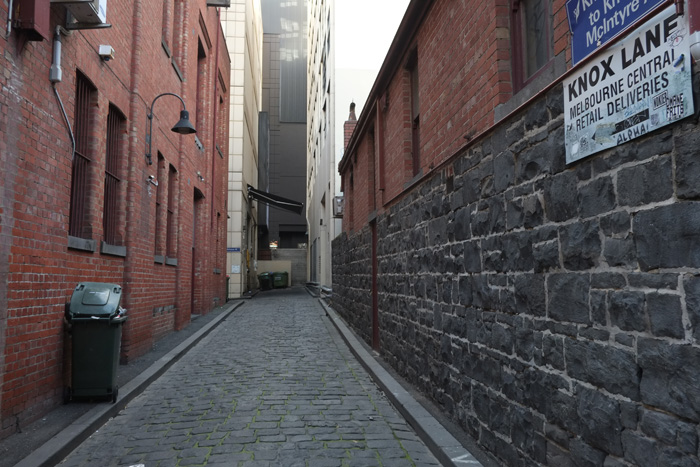 Next we cross Elizabeth Street and head up Little Lonsdale towards Swanston. Before turning right down Drewery Lane, Jerome points out Knox Lane, which was once the business address of the Coop's Shot Tower (back in the 19th century). He remembers that they held the St Jeromes Laneway Festival market down here, in the early years.

Along Drewery Lane, Jerome stops to point out Baroq House bar, which used to be Ruby Reds—one of the only live music venues in the city back in the late ’90s. 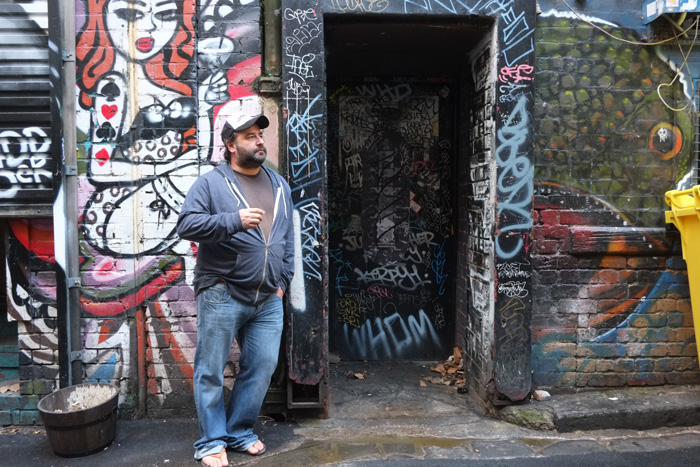 Taking a right off Drewery, we head down the graffiti-covered Sniders Lane—once the address of one of Melbourne's first laneway bars, Double-O. Standing in the doorway, Jerome pauses for his own trip down memory lane: "This was one of my favourite places! It was more of a nightclub. I would have loved to buy it. I could have, with the amount of money I spent in there … haha." 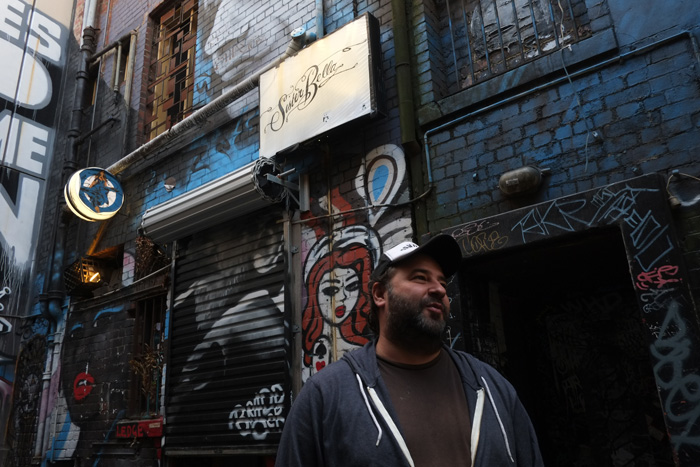 Next door is Jerome's own bar Sister Bella, which has been open since 2008. "Originally it was an electrical warehouse. It had been in the same family forever. Back then, there was a florist out on Bourke Street—his name was Mike and I used to call him Uncle Mike. He used to use this place as a store room. And obviously at that time, St Jerome’s was so busy, we needed space for storage. So Uncle Mike let me store stuff in his store room and eventually he didn’t need it. So I said, ‘Well, I’ll stay,’ and I turned the store room into Sister Bella." He explains that it was a lot more 'upmarket' than St Jerome's. "First of all, it was indoors! St Jerome’s was pretty hard. This was really soft. That’s why we called it the sister venue." 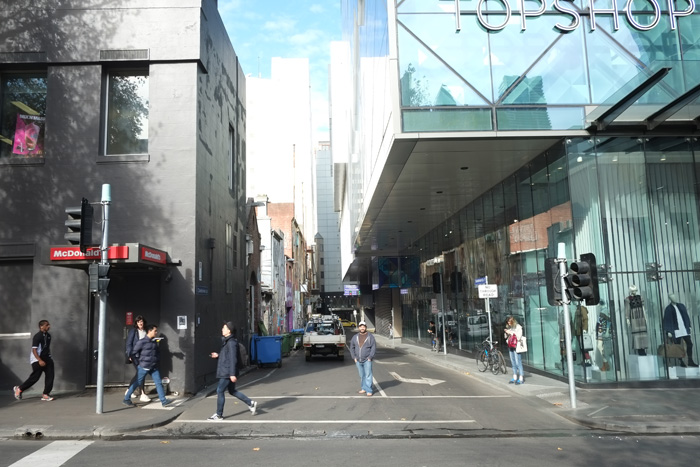 Now we're out on Lonsdale Street, looking over the road to what used to be Lonsdale House—the five-storey art deco building that was demolished to make way for Emporium in 2010. For a short time, Jerome had a cafe on the Lonsdale Street side called Birdbrain. "It was right where Topshop is now!" From here we can see right down Caledonian Lane, the former address of Jerome's most infamous venue ... 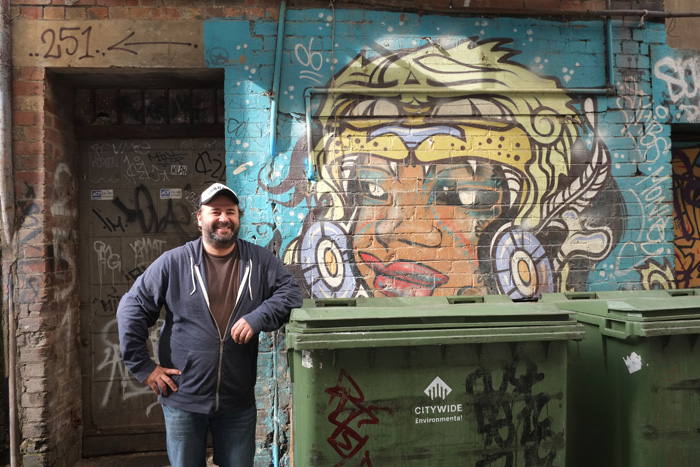 "Remember the mattress guy?" Jerome talks us through all the tiny businesses that used to be crammed together along the laneway. "Then there was the barber. And next door to that was Rancho Notorious. Across here you can still see some of the original artwork." Jerome explains the idea behind Rancho Notorious, which was to a create clubhouse and retail space for local street artists. "It was just about a creative space where we let the artists produce the artwork and take 100 per cent of the profits, as long as they paid the rent. At that time those kids couldn’t lease a shop in the Melbourne CBD. I had a good relationship with Myer—they let me lease it, and the artists worked there and took the profits." 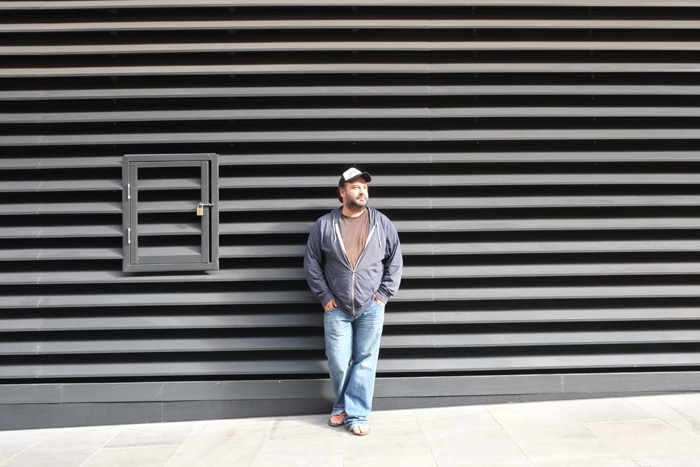 Jerome stops in the spot where his bar St Jerome's used to be, and regales us with the story of how it all began. "It used to be this old Swiss cafe called The Old Swiss Cafe. I ate there all the time. It was crazy, there were probably about fifteen regular customers and that was it. We used to get involved in the most ridiculous debates every day. One day, I said to the guy, 'Ernie, you’re getting old and GST’s coming in and you haven’t got a clue what’s gonna happen have you?' He’s like, 'No you’re right that’s too hard for me, do you wanna take it over?' So I called the landlord, which was Myer, and they said 'Sure! Who in their right mind would want this space?' 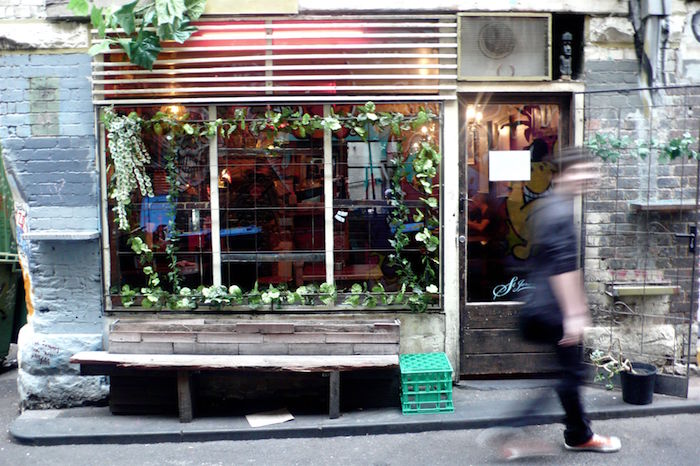 "I think St Jerome's was a place that didn’t judge, and you could do what you wanted to do. Who am I to tell people how to behave? Really? I mean, I couldn’t behave myself. It brought a really nice momentum, it built a really nice community. Recently a guy sent me this framed picture, and that's the only picture I’ve got of the place—by some random guy who went to the effort of framing it. It meant a lot to people."

Thanks for the tour, Jerome! To check out Jerome's latest project—a five-star camping hotel perched on Melbourne Central's own rooftop—head to our info page and click through to make a booking.