Open House Melbourne is back for another year so we’re taking a look at the history behind some of the buildings on the Melbourne Central block. Though a lot of demolition happened here in the 1970s to make way for the city loop, there’s still a bunch of architectural gems with interesting stories to tell about the area’s religious, cultural and industrial heritage. 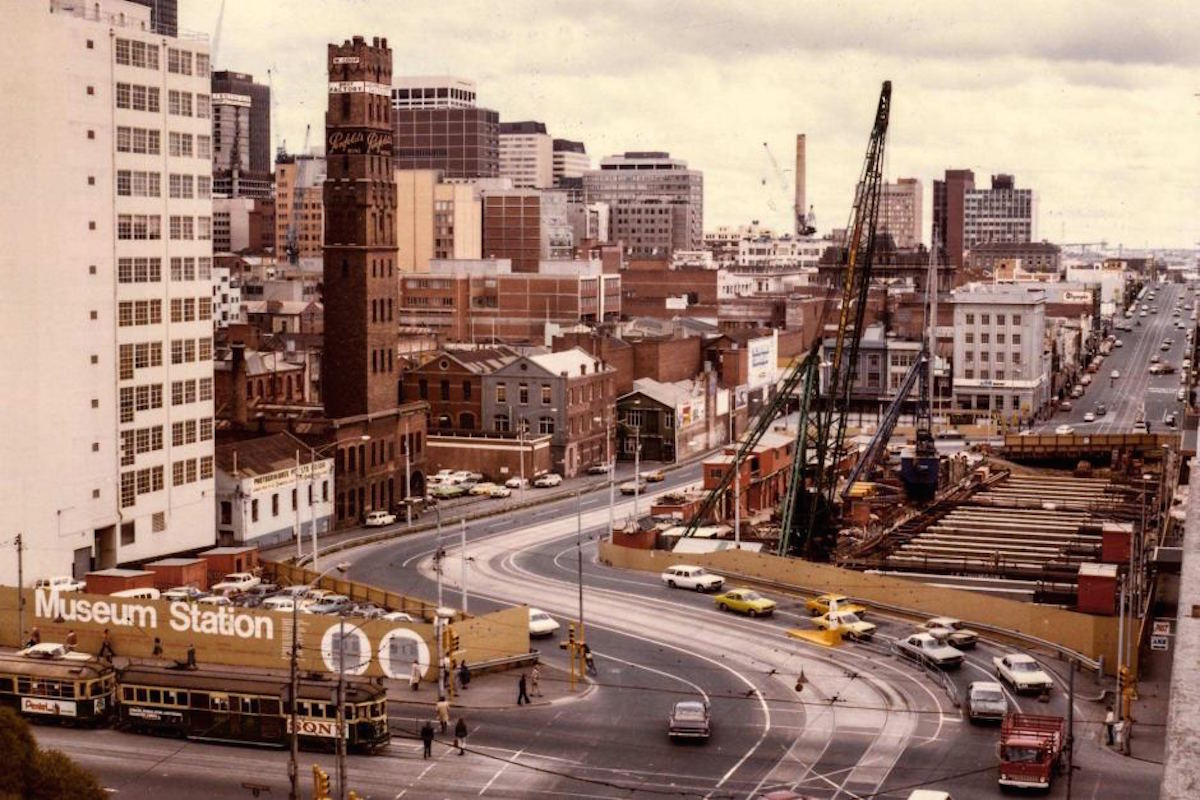 
The Coop’s Shot Tower reminds us of central Melbourne’s industrial heritage. The castellated tower (one of only three left in Australia) was completed in 1890 for the production of spherical lead shot used in shot guns. At 50 metres high, it was the tallest building in Melbourne until the 1930s, and remains a local landmark today for the 15 million people who use Melbourne Central Train Station every year.

On the top two storeys of the tower are shot pouring rooms. The shot maker would climb 700 stairs as steep as ladders to work for the day in searing heat. (Inscribed on the wall are the words “Little Hell”.) Lead was hauled to the top in a bucket, melted with a mixture of arsenic and antimony, and ladled into a colander to create drops as the lead filtered through. Over the 50 metre fall, the molten lead formed into perfect spheres.

The Coops made all manner of lead products here until 1961. The flanking buildings around the shot tower were used to make lead pipe for Melbourne’s electricity system, lead stair grips for the city’s trams, as well as malleable lead for the city’s leadlighters. Over the years the Coops made a fortune, which you can read in the unusually decorative tower, as well as the art nouveau facade of their office at 202 Little Lonsdale Street.

Recognised by the National Trust in 1973 for its unique industrial and social heritage value, the tower was enclosed within Kisho Kurokawa’s striking 84-metre glass cone in 1990.

Learn more about these incredible landmarks on Melbourne Central’s Unlocked Tours taking place on the last Sunday of every month. 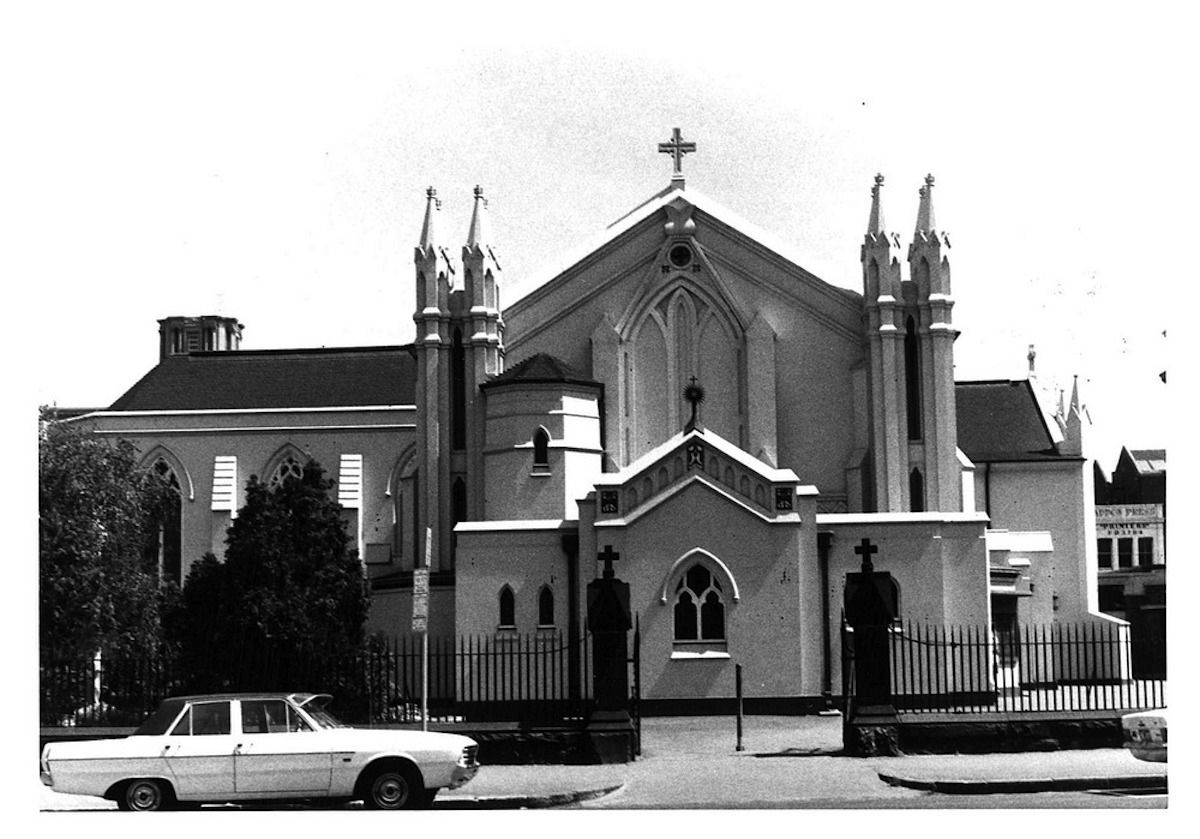 St Francis’ Church is the oldest Catholic church in all of Victoria, and is one of only a handful of buildings in Melbourne that predate the gold rush of 1851. Certainly it is the oldest building in Elizabeth Street. A church was first built on this site in 1839—made simply of secondhand floorboards—which served the St Francis congregation until they raised enough funds to commission the architect Samuel Jackson.

The church you see today is pretty much as Samuel Jackson conceived it, and it is a very early example of the Gothic Revival style of architecture in Melbourne. The nave was completed in 1842, a cedar ceiling in 1850, galleries in 1853 and the ornate Ladye Chapel in 1858.

The Renaissance style sanctuary was completed in 1879, designed by one of Melbourne’s most prolific architecture practices Reed and Barnes (they were also responsible for the State Library of Victoria, Exhibition Buildings and many more), which survives today as Bates Smart, Australia’s oldest architecture firm.

Inside the church you can find an ancient piece of Melbourne history. In the sanctuary are two chairs made from the trunk of an enormous red gum that stood on the site until 1878—one of the last vestiges of the place called Naarm before the city of Melbourne was built. The gum was so big that for years it was used as the church’s belfry!

Ned Kelly’s parents married here, and Mary MacKillop—founder of her own religious order and Australia’s only saint—was baptised here. Today it’s one of Melbourne city’s most frequently used churches, with more than 10,000 worshippers attending each week. 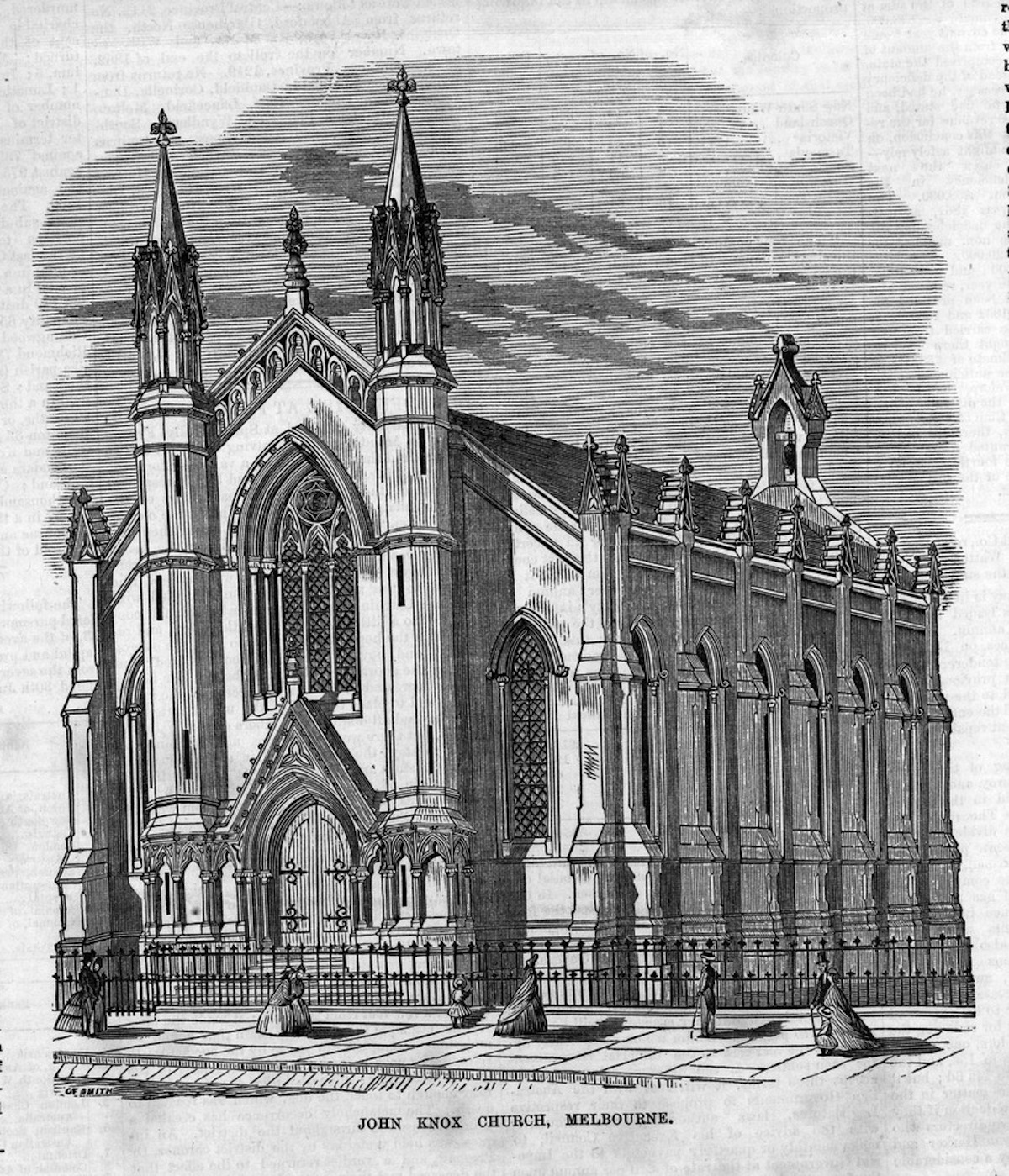 At the corner of Little Lonsdale and Swanston streets is a bold church that traces the split in the Presbyterian Church in the mid-nineteenth century.

The John Knox Presbyterian Church was one of the first commissions of another of Melbourne’s most prolific architects, Charles Webb. You’ll find his name behind the South Melbourne Town Hall, Royal Arcade, the Windsor Hotel and many more.

Built in 1863 it is typical of the Gothic Revival style in Melbourne: lots of buttresses, lancet windows and an elaborately decorated front facade approached by a flight of nine steps. The entrance lobby is surmounted by turrets that rise almost 20 metres. It is an imposing edifice that, even today, commands attention on visually busy Swanston Street. Incredibly, it took just six months to build.

Unusually for the era, the church’s stained glass windows were made in nearby North Melbourne. Look closely at the bottom of the central window in the front facade and you can even see the name of the makers, Ferguson and Urie.

Presbyterians had worshipped on this site since 1848. Always they had been “Free Presbyterians”, who separated from the main church in the 1840s. Though most Presbyterians reunited in the late 1850s, this congregation did not, even electing to build their own new church on this site. The congregation, however, was too small to be sustainable and was dissolved in 1881, and the building was sold to the Church of Christ. 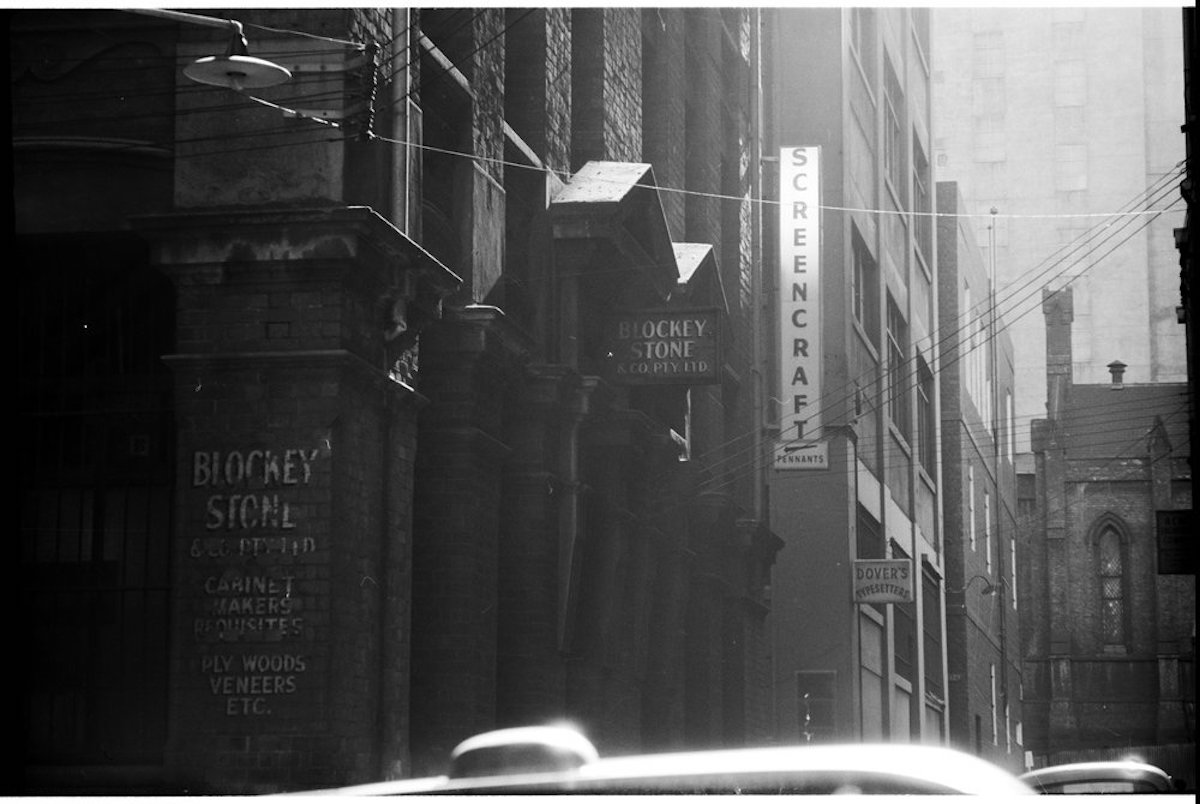 Tucked away on Drewery Lane, the Dovers Building was constructed for Melbourne tobacco merchants Sniders and Abrahams in 1908. This was their cigarette factory. A clue to that heritage can still be seen in a ghost sign advertising Grey’s cigarettes on the building’s east elevation. Ephemera collectors might also know their tobacco tins and very early football player collector cards, which were given away free with every packet of cigarettes sold.

The Dovers Building is architecturally significant for its unglamorous but important “flat slab system” of construction. It is the first building in Australia (and just the second in the world) constructed using this system of steel reinforced concrete. This technology is central to the evolution of skyscrapers and of course cut construction times considerably. This building, however, is just five storeys high, though the architect added two more storeys in 1938.

A penthouse level was added to the building in 1990s when it was converted into apartments, which tells yet another story about the evolution of Melbourne’s built environment. 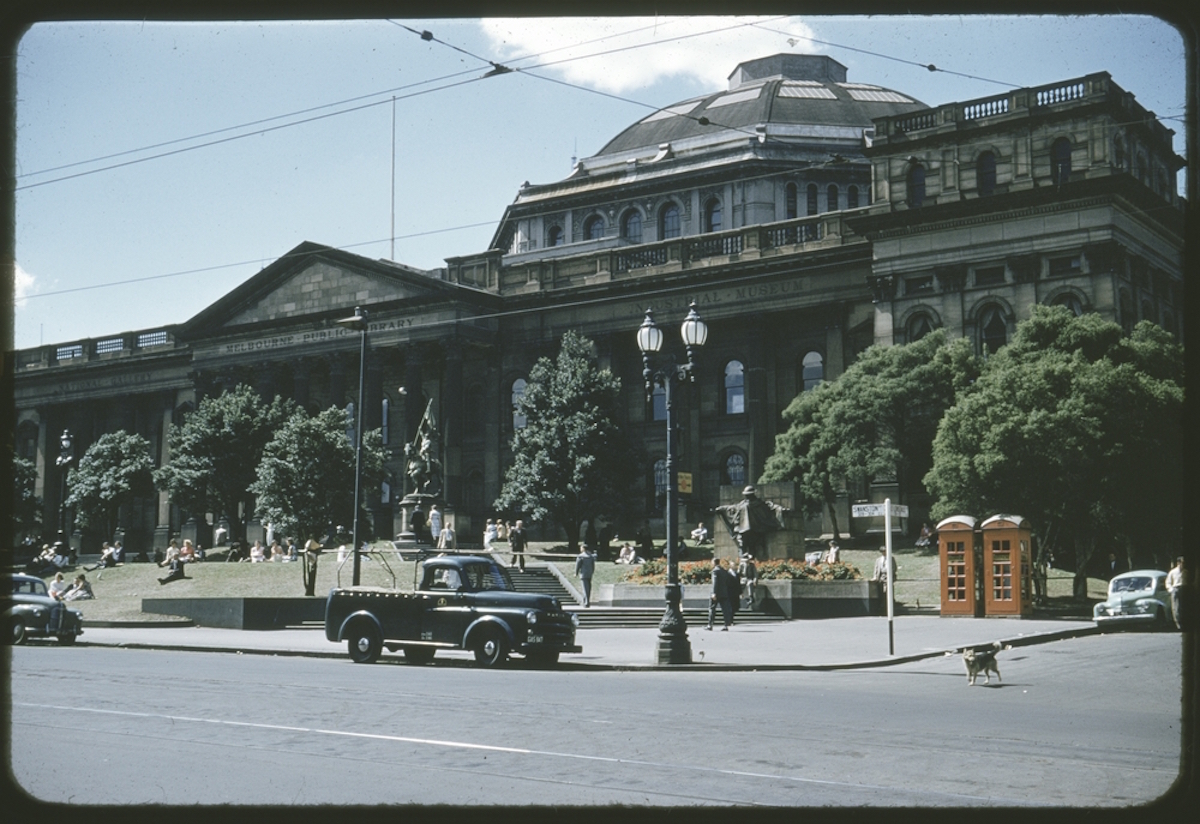 Image by Allen Kelso, 1954, from the State Library of Victoria

The State Library of Victoria is a vast complex of some nineteen different buildings. The first building on the site was designed by Joseph Reed and opened in 1856. Soon the Public Library—the first free public library in Australia—was supplemented with new buildings for the National Gallery of Victoria and the Museum. The gallery was only ever intended to be temporarily co-located with the library, though it stayed until 1968! When the museum finally moved out in 1990s, the library became the sole tenant of the site for the first time in almost 150 years.

Construction on the site had been pretty well continuous until the 1960s, and incredibly most of it was overseen by Joseph Reed or his firm, from the famous 1870 columned portico to the eminently Instagram-able 1913 domed reading room. (With a 35 metre span, it was briefly the largest dome in the world until Max Berg’s 65 metre-span Centennial Hall was constructed in Wroclaw, Poland later that year.) Notably, the dome’s concrete superstructure is entirely unadorned – a very early example of the power and beauty of concrete. 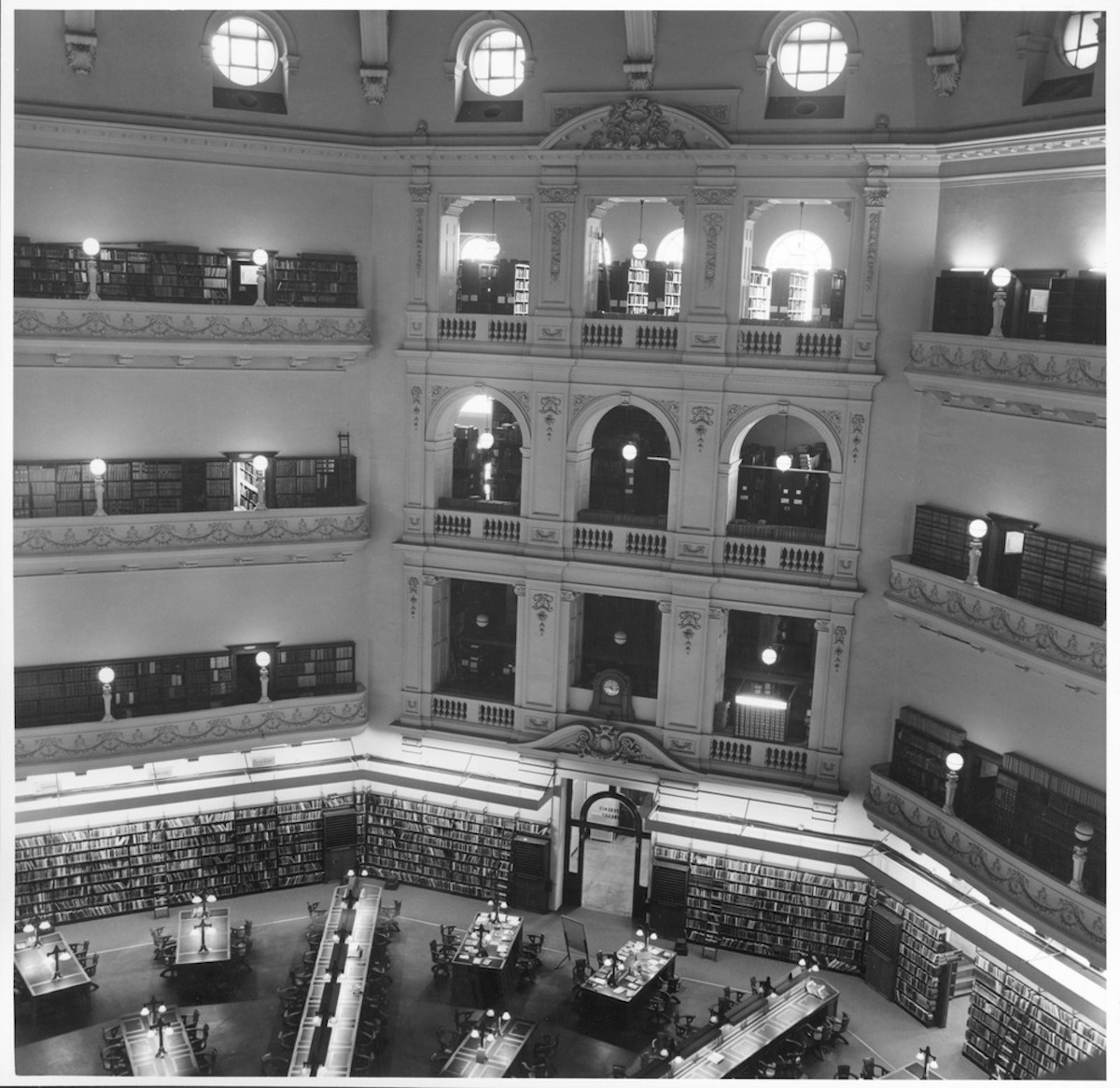 Image by Eva Kolvo, 1982, from the State Library of Victoria

On the steps out front you’ll encounter the imposing statue of Redmond Barry, the visionary behind the establishment of the library (his own books were the library’s first) and the University of Melbourne, though today he is best remembered as the judge who sentenced Ned Kelly to death and joined him there just twelve days later. 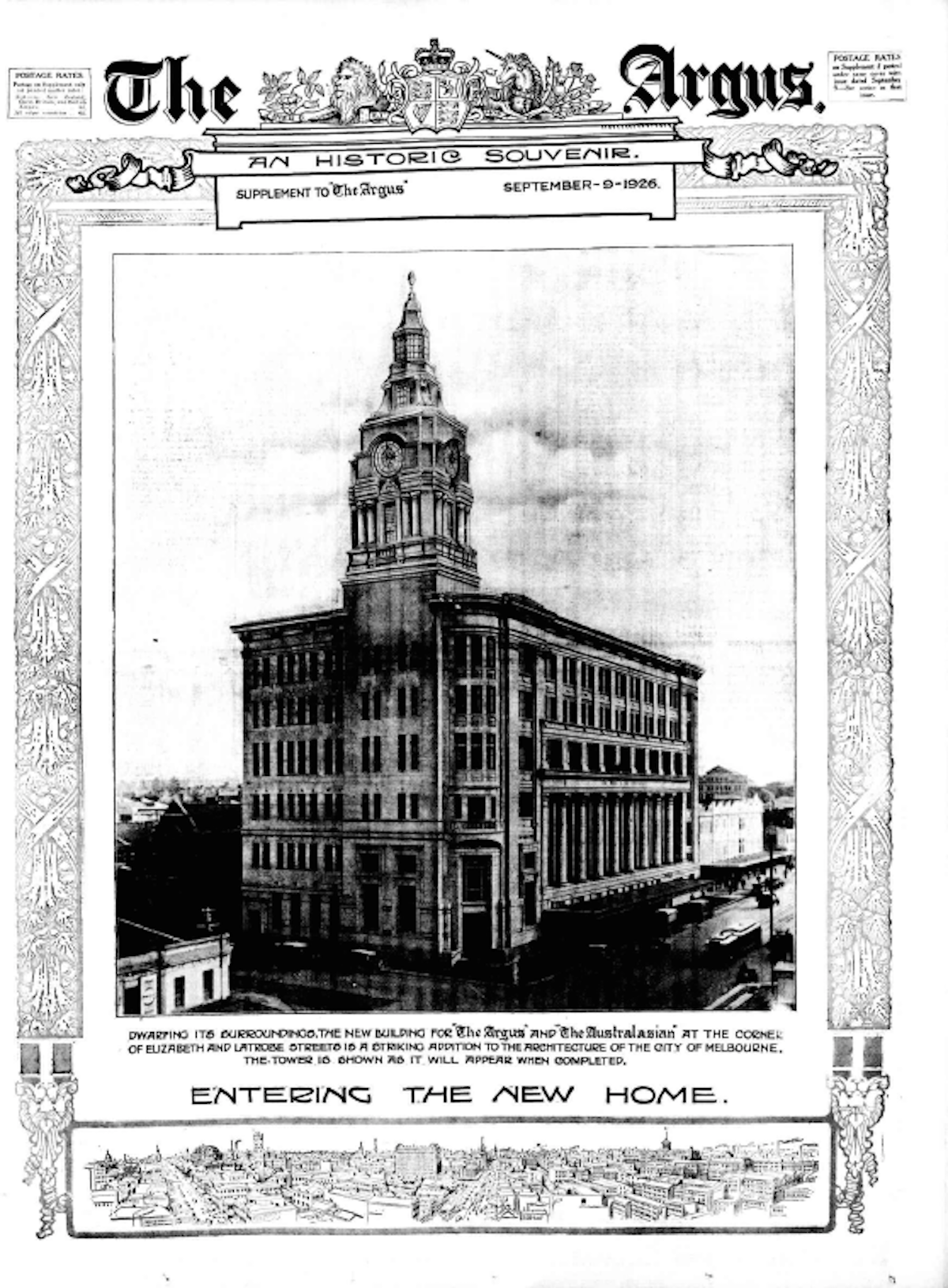 
On the northwest corner of Elizabeth and La Trobe streets is a monument to Melbourne’s golden age of newspapers. Designed by Godfrey and Spowers and built for the Argus media group in the late 1920s, the Argus Building tells the story of the rise of fall of newspapers in Melbourne.

The building is a combination bun of architectural styles: it’s a little bit stripped classical, Beaux Arts, Chicagoesque and even a little bit early Moderne. Significantly, it housed, under one roof, all the numerous workers and machinery involved in composing and printing a high-circulation newspaper. But look closely and you’ll note its tower was never finished: it was intended to be crowned with a clock tower rising another two storeys, but the depression intervened and it was never built.

For more than 100 years The Argus was one of the city’s most popular newspapers. It was established in 1846, though you can trace its roots back even further to Melbourne’s first newspaper, The Port Phillip Patriot, which was first published in 1839 by one of Melbourne’s founders, JP Fawkner himself.

The newspaper became so powerful that it even had a hand in devising the finals system that determined the premier of the Victorian Football League (now the AFL). In 1949 the Argus and its stablemate the Australasian Post was bought by London’s Daily Mirror Newspaper Group, and in 1952 the Argus became the first newspaper in the world to print in colour. But just seven years later the Argus closed after 111 years in print. Declining profitability was attributed to an increase in the cost of newsprint as well as competition from other newspapers and radio.

Unoccupied for the next half century the building fell into disrepair. Plans came and went for conversion into apartments before the Melbourne Institute of Technology took ownership in 2008 and completed its refurbishment in 2014.